One of my biggest interests is architecture, and I hope to go on to study it. Architecture is a completely different art form to most others – its on a much larger scale than most paintings or photos! In my opinion, its probably the most accessible form of art because everyone encounters it every day.

My interest in architecture has unsurprisingly lead me to Bristol’s Architecture Centre. They are another Bristol based organisation that focusses on Bristols architecture scene. Working with them has been great fun, and while its not directly aimed at young people, there was still plenty I could get involved with! You can see me in the red top in one of the pictures at an event, where we were planning a city using paper, blocks, lego and whatever cardboard we had lying around! It really got us thinking about the different elements that come into play when designing a city.

This post is mainly about their new project at the moment, which – unlike their previous projects – is actually aimed at young people!! Its sounds really interesting, and you can check it out and apply here! The project is all about getting young people involved with architecture, designing and planning, and I’ve managed to get a place in it! There are going to be a series of workshops that if you get in, will be run by several different experts from their fields! This could include anything based around the topic, so there will be some really good ones. 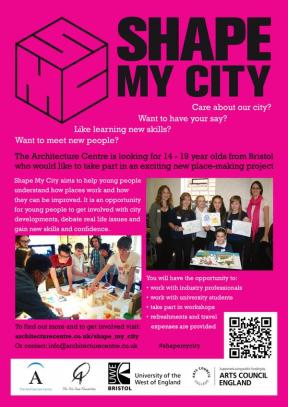 Its all building to this years youth takeover day in November this year, where they are hoping for the group to lead some sort of design proposal. The project is completely new, which makes it really exciting to know that I’m going to play a part in defining architecture for young people in Bristol! Its not just something I can put on my UCAS form, its a brilliant experience I can’t wait to be a part of!

They are still taking applications to join the group! So anyone who is interested should get onto their website and go for it!